(This is the post I was preparing while still in Africa.
We returned to the USA on Nov. 5, 2013 after 21 months,
due to a health emergency)

KINSHASA HAS CHANGED A LOT IN 20 MONTHS.
THERE ARE PRACTICAL & COSMETIC DIFFERENCES
AND A GOOD ARGUMENT COULD BE MADE FOR
THE IMPORTANCE OF THE LATTER
AS WELL AS FOR THE FORMER.
UNFORTUNATELY, MANY OF THE ON-GOING
POLITICAL, CULTURAL & COMMERCIAL TRADITIONS
PREVENT THE DR CONGO & IT'S PEOPLE
FROM REACHING FULL POTENTIAL.
WE KNOW THAT THE GOSPEL OF JESUS CHRIST WILL
MAKE IT POSSIBLE FOR THE CONGOLESE TO PROSPER.

8
This is close to the location of our Church meetinghouse.
You can hear the bystanders yelling, in Lingala,
for the people in the shaking building to "Get out!".
It is a dramatic example of the inferior, sub-standard construction
which prevails here.  There were deaths & injuries.


ELDER OMAN'S TESTIMONY
One of our best missionaries.  A great example to his family,
fellow missionaries and all he met. (Click on above for URL) 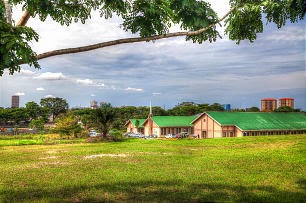 Our Gombé (G.B.) Ward meetinghouse with
the Seminary & Institute building to the right.
This view overlooks the future site of the Kinshasa temple,
which will bless all the people in the DR Congo
and several surrounding countries.
Posted by Joan at 2:41 PM 1 comment:

Email ThisBlogThis!Share to TwitterShare to FacebookShare to Pinterest
Labels: Cause for Hope Despite Continuing Problems

THIS IS TRENTE JUIN BLVD. IN 2009, BEFORE IT WAS PAVED
.  IN THE PAST 2 OR 3 YEARS, THEY'VE MADE LARGE SIDEWALKS
ON EACH SIDE, EIGHT LANES & A DIVIDING MEDIAN IN BETWEEN.
SO, NOW YOU DON'T OFTEN SEE A CAR COMING AT YOU FROM
THE WRONG DIRECTION... (KEY PHRASE, "OFTEN")
THINGS ARE IMPROVING, BUT IT IS STILL THE CONGO. 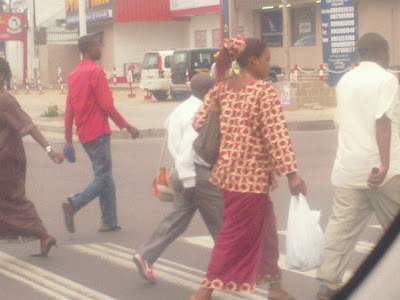 The good thing about frequent stops is that we get to see more
of the creative Congolese dresses. 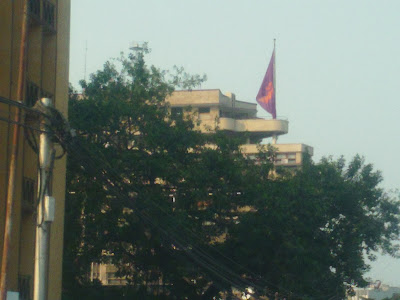 One early evening, we were approaching this multi-storied bank building,
when I pointed out to George that someone was using a cutting torch near the top
and large chunks of hot metal were falling all the way down to the street.
Both parked cars and pedestrians were at risk, but this is the Congo! 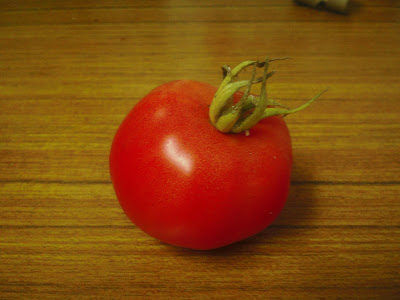 This was the sum total of George's third or fourth gardening effort.
The plants start out wonderfully, but then just suddenly wither before
anything much can be produced. 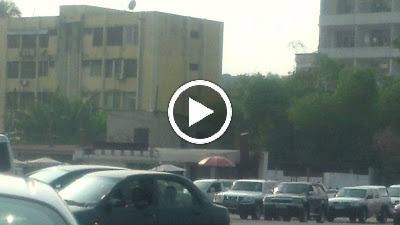 This is the intersection that we enter just feet outside the apartment.
The short video doesn't do it justice, but if you can count how many
directions the cars are going, you get the idea. 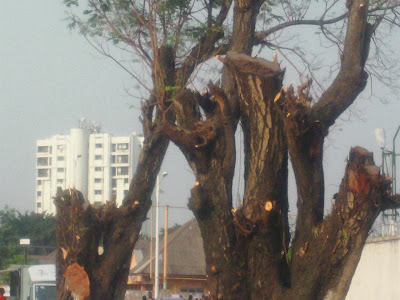 On Avenue de Justice (filled with hazards of deep potholes & the common
sight of fast-moving cars coming toward you in your lane as they avoid them),
they are cutting back or cutting down huge old trees that have been there
since the Belgian Colonization.  Hopefully, this is just necessary to widen
this popular alternate to Trente Juin & it will be beautified w/ new trees.
In the distance, you can see the Mission Office/Mission Home building. 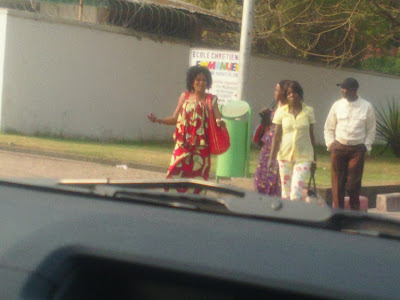 This pretty, full-length, sleeveless sun dress is not the usual fashion. 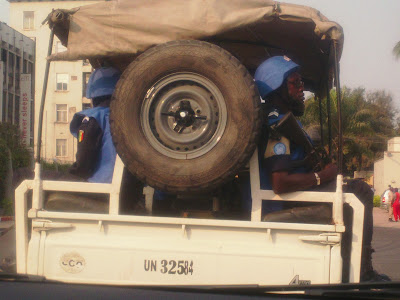 Always fun to see our UN forces in full riot gear.
No one has much hope that these guys would protect us
in case of revolution or invasion. 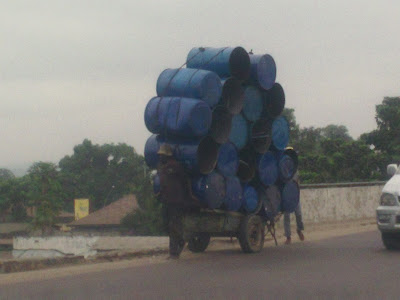 On Lubumba Blvd. (the road to Masina, Kimbanseke & the Airport)
The pous-pous guys carry the most cumbersome & sometimes
incredibly heavy loads.  You almost groan in sympathy with them
when they're trying to go uphill. 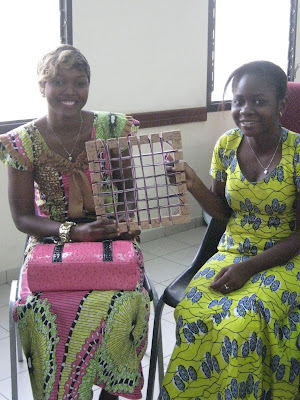 Back to the Women's Conference... the sisters paired off,
picked the colors of yarn they wanted and went to work on the frames.
Above left is one of the twins in our stake who are quite well-known.
Their family is huge and among the most stalwart. 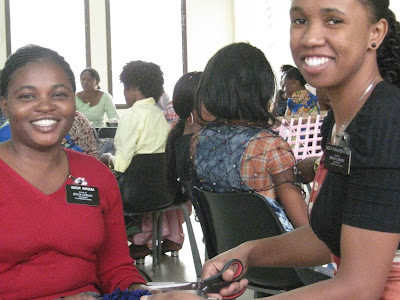 Two of the best  missionaries in the DR Congo Kinshasa Mission..
Sister Kwizera  (was thrown out by her family when she joined the Church
and then adopted by the Malabi family in Burundi).
Sister Fantenantenasoa, from Madagascar, who has finished her mission now. 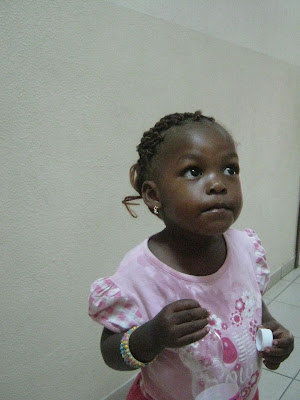 At one point, we met this little one in the hall.
She wasn't entirely sure about these "Mundeles"